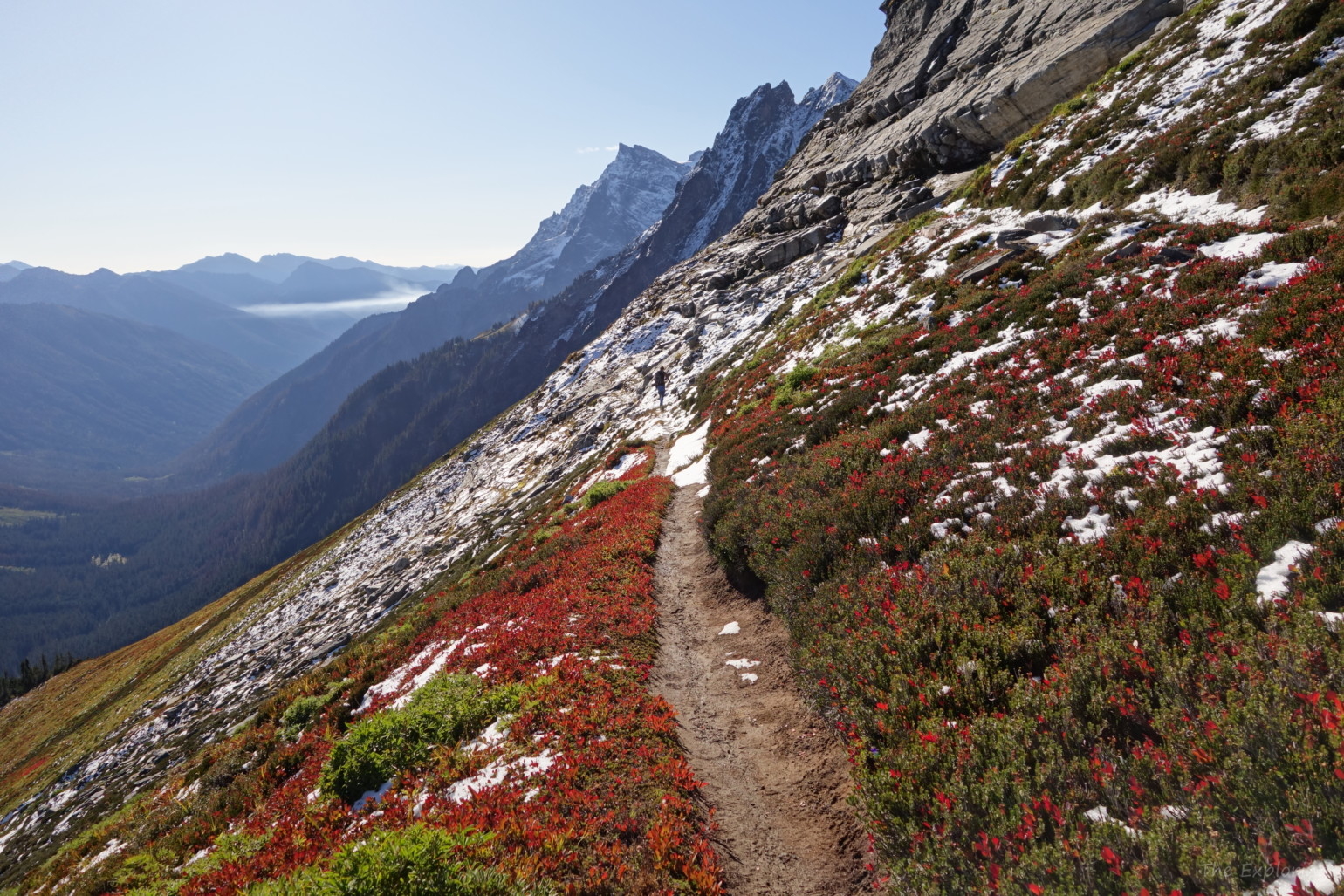 Buck Mountain continuously kept getting canceled due to raging fires smoldering through the Glacier Peak Wilderness. With each year a new valley in the area burned making it impossible to link into the Glacier Peak Mega Circuit. Smaugust was no exception this year, we contemplated biking 40 extra miles into what was already a big trip. However hellacious smoke with viewless scenery made it sound worse than a pack of sizzled cigars. Due to a few rain storms it went from Smoketember to Autumn paradise. It was exciting to not only be able to finish a life goal; but see wanderlust mountains coated in crispy white coats of early winter. On September 18, 2018 I became the youngest person to complete the Washington 100 highest peaks. It took 9 years, 1 month, and 16 days starting at age 16 when I summited Mount Baker.

While driving up the Chiwawa River Road Matt and I look out the van window. “Eh he he he. This will be interesting” I casually laugh while putting on a pair of tennis shoes. There was thousands of feet of fresh snow coating the surrounding high peaks. The trail up to Buck Creek Pass was in great condition with hardly any brush. After filling up water we left the trail at about 5,600 feet turning right towards No Pass. Near the pass we separated for a while; Matt went for Fortress while I went for Helmet Butte. The route started out as a friendly bushwhack with a moderate slope requiring mild care with steps. The last 400 feet to the summit get a bit more interesting. Ice and powder cover over loose rocks and slippery moss making every step require much caution. As I get further each hand hold kept blowing. On the verge of bailing I find an interesting cross over to the left that made the terrain much more feasible. 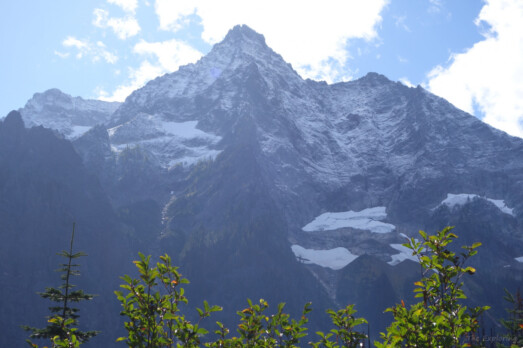 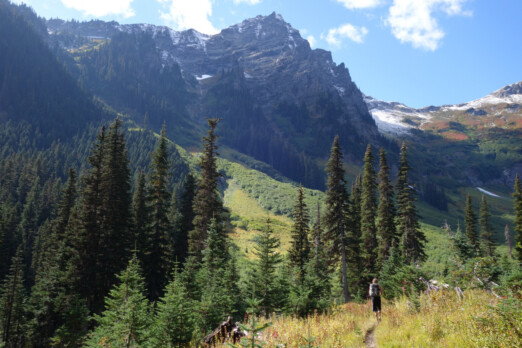 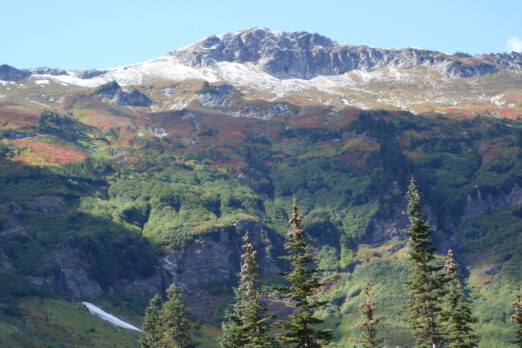 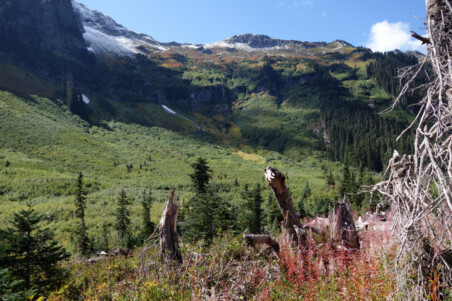 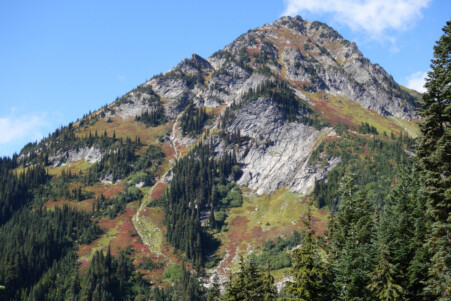 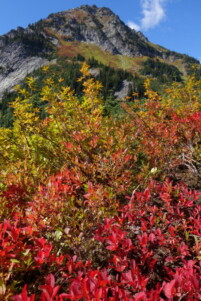 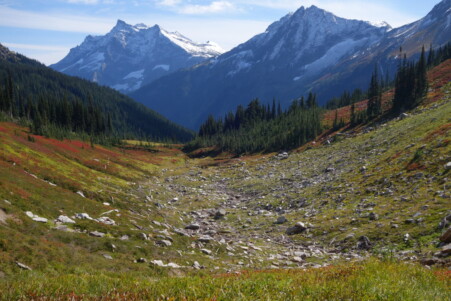 Knowing that the class 4 moves would be rather tricky to down climb it was better to find another way down. After climbing over a handful of blocks to bypass the southern summit cliff was able to descend the east face diagonally back below the east ridge. Back down to No Pass Matt arrived a little later making haste to Buck Creek Pass camp.

The next morning there was a light amount of frost. The hike up to Buck Creek Pass was uneventful but absolutely gorgeous. The Dakobed Traverse was as beautiful as ever; hanging glaciers, coated cliffs, inspiring spires, and blazing fall colors to accompany the view. The boulders had icy patches making it trickier in places, but not detrimental to performance.

Passing Berge our enthusiasm kicks in as we plow through dustings of snow in our tennis shoes. Conditions couldn’t have been any better. Every moment stopped we would be dumbfounded by a new exciting scene with flowing clouds changing the contrasts on the ice cream summits. The last 1,700 feet had sections of 6 inch powder sections but was mostly wind blown. Nearing the summit I had figured out that the true summit was the center massif (broad one on the left, but not the far left). USGS mistakenly labeled the north one as the true summit. From the col we scramble over icy boulders to the summit. A shame there was no summit register; but at least a goal was attained.

After having pizza and other treatdom we retreated down the eastern slopes by going past a sharp high point on the south side. From there we scrambled and hiked down scree fields to a notch at 7150. From here we passed into gullies and past a cliff system to take us onto the east ridge. The route remained good until the last 2,000 feet down. Fortunately it was only moderate brush with some steep slippery spots. Got a few cuts and at one point was hanging in the air by one arm due to a nasty slide that left my fingers numb for the next few hours. At the valley floor was a cliff system that was passable using a ramping ledge. The river crossing was cold but fairly easy. We took advantage of a flowing creek umbrella to take us up to easy brush that led to the trail. From here it was an easy 35 minute walk back to the car.